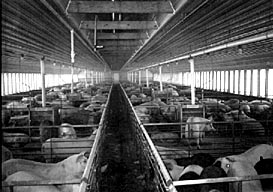 Ammonia is the most important gas healthwise found in swine buildings on a day-to-day basis because it can occur at levels high enough to be an irritant to the respiratory system. The recommended maximum gas concentrations suggested by OSHA (25 ppm) are much higher than those suggested by agricultural scientists in Europe (10 ppm).

Many studies have been done over the last several years in Europe and North America to see what can be done to reduce indoor levels of ammonia gas through building design and management practices, Table 1. From these studies, it doesn't seem like any single solution will do the job satisfactorily. Ammonia gas can be significantly reduced if the right things are done simultaneously with available methods and management practices that involve ventilation, manure management, building hygiene, and feed management. Implementing these strategies for ammonia reduction in swine buildings may also reduce other manure gases and odors.

Since additional airflow reduces contaminant levels, ammonia control should be considered when choosing the minimum ventilation rate. Proper ventilation will also require uniform distribution of fresh air into the room. Air circulation fans or distribution ducts improve the mix of indoor air during the winter. Air speeds across manure-covered surfaces should be minimized since the amount of ammonia gas given off by manure is increased with air speed. In one experiment with 165 lb pigs, increasing the air change rate from 2 to 4 air changes per hour increased the quantity of ammonia released from 250 to 350 mg/hour.

The design, location, and management of ventilation inlets can affect air speeds across the floor and over the pit surface. Make sure the inlets are working properly. Most incoming air jets in cold weather should travel across the ceiling first and then down to the floor. By that time, the speed of the fresh air is quite low. Exposed purlins and ceiling fixtures can prematurely detach an air jet from the ceiling and direct it down to the floor at relatively high air speeds. Air inlets that direct incoming air down the wall can therefore increase ammonia emissions into the room.

Air exhaust from the pit is not likely to increase air velocities across the manure surface unless it is within two or three diameters away from the discharge hole in a duct or the exhaust fan. Do not overfill a pit under slotted floors--leave at least 12 inches between the bottom of slat supports and the top of the manure.

There will be some ammonia in the room even with well-designed pit ventilation, because ammonia offgassing will also come from urine and manure that accumulates on the slats and other room and equipment surfaces. In some cases, the pit contributes only a minor portion of total ammonia gas. Keep bedding, animal pens, and feeding areas dry to slow down manure decomposition. Ventilate to dry wet areas quickly or add new bedding.

Make sure fresh air doesn't enter the building through the manure pit, e.g. through uncovered pump-out ports. This may happen with wind-induced back pressure on the pit ventilation fans, especially variable-speed pit fans which are extremely vulnerable to wind at low speeds, e.g. < 50% of maximum. Include an air trap in drain lines to reduce backdraft of manure gases from an outside storage.

Wet scrubbing reduced ammonia levels by 40% in recent tests. Air was forced up through a shaft filled with thousands of small pieces of inert plastic, against a downward flow of water. It also removed a significant amount of dust particles, bacterial and fungal spores,

and carbon dioxide. Scrubbers can also remove more than 90% of odorous gases; however, the technique is relatively expensive at the present time.

To reduce ammonia levels, avoid storing manure in the building for long periods. The rate of ammonia released from manure increases for storage times longer than about one day. However, there are no further reductions in ammonia release rates for less than one day because so much comes from dirty surfaces (slats, floor, animals, etc.). Ammonia production peaks at three days and again at 21 days. Frequent manure removal helps maintain low ammonia gas levels. Removing manure frequently to reduce ammonia is more effective with poultry than with swine because ammonia formation takes place mainly from the swine's urine. This occurs so rapidly that cleaning intervals in swine buildings would have to be at least half-hourly and the urine, in particular, would have to be removed as completely as possible. This can be done efficiently only with flushing systems since surface scrapers always leave behind a film of urine on the surface, from which emission takes place. European researchers are developing gutter scrapers that automatically separate the liquid from the solids.

Researchers in The Netherlands compared the relative ammonia emissions for five different manure collection systems, Figure 1. Total slotted floors with deep pit and long-term storage generated the most ammonia gas. The building with a partially slatted floor and manure pit produced 20% lower ammonia emissions. A partly-slatted floor combined with a sloping floor under the slats from which manure was flushed several times a day was 30% below that for a deep pit. Greater emission reductions were achieved when manure was collected under the slatted floor in about 4 inches of flushing water so manure that falls into liquid and solids are submerged. If the mixture was regularly pumped out and replaced by new flushing liquid (as in pit recharge), the reduction was 60%.

Using the "pull plug with recharge" or "fill and empty" principle of manure removal, the reduction increased to 70%. In this last case, pipes were laid under the floor of the manure pit leading to the outside manure storage. Inlets to these drain pipes were placed at regular intervals in the floor. The drains could be closed with plugs, shut-off balls, or gate valves. When opened, the slurry or flushing liquid flowed out without significant surface turbulence into the outside liquid manure storage. The openings are then closed and new flushing liquid added to the pit. The results of these tests agree with Canadian researchers who stated that there is no advantage to continuous flow gutters, flush gutters, or scraped gutters over fill-and-empty gutters in terms of ammonia production.

Treatment of liquid manure pits to reduce offgassing will have one of the following objectives: (1) to develop an aerobic system, (2) to enhance anaerobic conditions, or (3) to stop microbial activity. Aerobic systems involve the use of aeration pumps and continual agitation, and have high energy and maintenance costs. Additionally, restarting aeration following repairs of the system can cause acutely toxic conditions by stripping out anaerobic gases that have built up in the manure.

Adding water to the pit reduces ammonia concentration in the slurry by enhancing anaerobic conditions and diluting the concentration of urine. Table 2 shows that manure composition (solids vs. liquid) has a great effect on ammonia emissions.

Ammonia is highly water-soluble and can largely remain in the water in the dissociated form as ammonium. Only that part which is present in the unionized form can become volatile and be released as a gas. The proportion of volatile ammonia to total ammonia concentration in stored manure is a function of manure pH and temperature. The higher the manure pH, the more ammonia is present in the manure in volatile form. Figure 2 shows the relationships between pH, temperature and the potential for release of ammonia gas. The greatest increase in ammonia release occurs at high temperatures between a pH of 7 and 10. Only small quantities are released at a pH<7. Hardly any measurable amounts of free ammonia are present when pH4.5 is maintained. Manure pit pH can be lowered by adding nitric acid. Other acids that can be used are hydrochloric acid, sulfuric acid, and phosphoric acid, but nitric acid is the most popular since the other acids affect manure quality. An even distribution of acid is needed and it will increase the nitrogen content of the slurry. Be very cautious in handling concentrated acids.

Chelated copper-sulfate solutions are used to slow down gas-producing bacteria. Other chemicals which are sometimes added to pits include paraformaldehyde, superphosphate, phosphoric acid, and acetic and propionic acid. Crystalline hydrated aluminosilicates (zeolites) are sometimes added to adsorb ammonia in the pits.

Well-managed and sufficient amounts of straw bedding will reduce ammonia gas inside the building more than any other solid manure management system. However, the overall emissions to the outside atmosphere are the same due to higher losses during storage and spreading. More dust is found in the building with straw, and fungal spores will dominate airborne microorganisms. The Dutch developed and tested a manure removal system for partially-slotted floor swine buildings in which straw bedding is used in the sleeping area of the pens. A filter net installed beneath the slats collected the solid manure and straw, but allowed the urine and waste water to drain into the pit. Both fractions were daily removed from the barn. Odor was reduced by 50% in the building with the manure solids separation system compared to a similar building with under-slat manure storage.

Good building hygiene reduces ammonia emissions by reducing the amount of manure-covered surface area. This includes the pig's skin. The warm body of an animal, when covered with wet manure, makes an area of accelerated bacterial growth and ammonia production which is quickly vaporized into the air by body heat. Keep pigs clean and dry.

Phase feeding with addition of synthetic amino acids can reduce ammonia emissions, Table 3. Less manure through more efficient feed utilization by the animal is a side benefit on top of the nutritional benefits.

Substances added to the slurry (2 oz/100 ft3 slurry at a cost of $114/gal) or to the feed to reduce the release of ammonia from the manure have not yet been tested over long periods and their effectiveness is still debated. Substances added to the feed appear to have a greater effect than slurry additives. It is very difficult to compare and evaluate reports about the use of these substances since there is presently no established test procedure for them.

Feed additives based on yucca extracts are incorporated in the feed at low levels (4 oz/ton, costs about $10.50/lb). The additional costs are about $1.35-$1.50/ton of grow-finish diets. Yucca extracts bind ammonia and prevents its release. Ammonia levels are reduced by 1/3 to 1/2 according to recent tests, Figure 3.

1. Ventilation System
A. Increase airflow rate
B. Modify and control air distribution
1. Reduce air speeds across manure-covered surfaces
2. Prevent air from entering room from pit by
a. Exhausting air from the pit
b. Slowing down inside air as it enters the pit
c. Preventing outside air from entering the pit
C. Wet scrub recirculating air (future method)

3. Feed Management
A. Use phase feeding with synthetic amino acids
B. Add yucca extracts to feed to reduce ammonia levels in manure