Safe Use of ATVs in Agriculture

When all-terrain vehicles (ATVs) first appeared in the United States in the 1 970s, they were promoted and sold as a recreational vehicle designed to provide “thrills” for the rider. Sport and recreation operators found that the ATV was a useful machine to move through areas not accessible with pick-up trucks, four-wheel drives or other motorized vehicles, and the ATV became a popular hunting vehicle.

The ATV has also found many uses in agriculture as a substitute for pick-up trucks, horses, and even walking. The ATV is now found on all types of farms and ranches, in orchards and forests, in ornamental nurseries and on golf courses.

ATVs are used to inspect crops and livestock; to inspect and repair irrigation systems and fence lines; to fertilize and apply chemicals; to supervise field crews; to herd livestock; to mark timber; to mow grass; to move dirt and to transport things from here to there and back again.

ATVs also offer a new sense of freedom to individuals with mobility handicaps. The ATV can be the wheelchair for the farm, ranch or orchard and enables individuals with disabilities to take a more active role in the operation and management of the business. 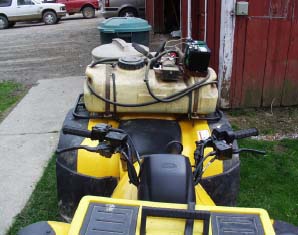 ATVs Can Be Dangerous

The Consumer Product Safety Commission (CPCS) reported that in recent years an estimated 25,500 individuals were treated for ATV-related injuries in hospital emergency rooms; nearly 0,000 were hospitalized and over 400 deaths were recorded. Over 30 percent of the injured persons were less than 6 years of age with 27 percent of the fatalities to children under 6 years of age. The CPSC report also indicated that 6.4 percent of all ATV accidents occurred on the farm, resulting in more than 20 fatalities on American farms annually. This number is expected to grow as the ATV becomes a more common agricultural machine.

Reducing the Risk of ATV Injury

To reduce the risk of injury or fatality while operating an ATV keep these points in mind:

Selecting an ATV for Agricultural Work

For most agricultural operations, an ATV with a coil spring shock absorber suspension system, an automatic clutch, reverse gear, shaft drive, and a differential with a locking mechanism offers the most versatility for agricultural work. PTO capability may be desirable for some agricultural tasks. Check with your dealer to determine what features are best for your operational needs.

Three-wheeler vs. Four-wheeler. A four-wheeler has greater capacity for work than a three- wheeler. They are more stable, and less prone to side overturns. The overwhelming asset of the four-wheeler is its stability. The sale of new three-wheeled ATVs has been banned but many three-wheelers are still in use. Avoid purchasing a used three-wheeler.

Speed and Power. Adult, work size ATVs come equipped with engines ranging from 90 to 700cc or more, with gear ratios that allow speeds in excess of 70 mph. The use(s) planned for the ATV should determine the size of the engine and the gear ratios. There are few, if any, reasons for a maximum speed of more than 25 miles per hour in any agricultural operation. Serious ATV injury incidents increase at higher speeds.

ATV Overturns. A four-wheeler can do many of the tasks formerly assigned to the small farm tractor. Just as safe tractor operation is influenced by speed, topography and load size, so is the operation of an ATV. ATV overturns on steep or uneven terrain can happen quickly. High speed, uneven ground, ditches or large rocks increase the chance of the ATV being rolled or flipped during operation. Adding the operator and/or work material raises the center of gravity and increases the risk of an overturn. Moving the ATV at a slower speed while shifting the operator’s weight to the upper side of the slope reduces overturn risk. Selecting an ATV with coil springs and shock absorber suspension systems will help reduce bouncing and pitching from side to side.

Uneven terrain makes carrying or pulling a load more hazardous. Rear overturns can be caused by climbing steep slopes, “popping the clutch” on a hard surface, or by attempting to carry or tow too heavy of a load up a slope. Heavier, four-wheel ATVs have lower centers of gravity and present less risk than lighter and faster ATVs in pulling a load up a slope. A unique feature of the ATV is that the operator’s position on the seat can significantly change the overall center of gravity. For example, moving one’s body weight forward while traveling uphill moves the center of gravity forward thus reducing the risk of a rear overturn (see Figure 2). Shifting the body’s weight from one side to the other is necessary for some steering maneuvers.

Additional recommendations to reduce the risk of rear overturn include not carrying more than /3 the ATVs weight on the rear carrying rack; spreading the load out between the front and rear carrying racks; and never towing a load heavier than the weight of the ATV plus the operator. Follow the manufacturer’s loading limitations.

Figure 2. ATV with mower. Operator has shifted weight forward for the hilly operation. 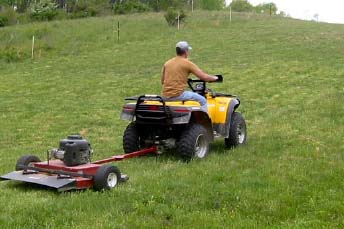 Loading and Braking. Trailers that are loaded with firewood or feed may tax the pulling and braking capacity of the ATV. An attachment such as a tow behind mower may have more weight than the braking power of the ATV can handle. Heavy loads can push ATVs down slopes with an increased risk of “jack-knifing”, sliding out of control, or being rolled over. Follow the manufacturer’s recommendations when pulling or towing loaded carts, mowers, or other attachments. Hitch only to the manufacturers hitch point.

The front and back tires of an ATV may operate independently or may have a linked design in which all four brakes work together. Using an ATV with a linked brake system reduces the chances of inappropriately or mistakenly applying the front or rear brake in a way that reduces control of the machine. Regardless of the braking system used, learn how to brake at differing speeds and when pulling a load to reduce risk of losing control while stopping or turning. The ATV Operator’s Manual can help you understand the machine’s braking capacity.

Unseen Obstacles. Often times the ATV used for slower moving agricultural work may also be used to herd livestock at higher speeds over uneven terrain. Know the area over which you will operate the ATV. High speed travel across a field may lead to the front end of the ATV dropping into a ditch or hole or hitting a rock. Rolling over or flipping the machine can result in severe injury. It could be a fatal mistake.

Figure 3. Example of an agricultural use of an ATV. 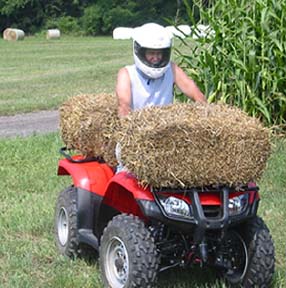 Helmet. Most experts recommend that a full-face helmet always be worn when riding an ATV. While some agricultural uses are at very low speeds where a helmet may interfere with close inspection or become unbearably hot, low-speed work activity often occurs with higher speed travel to and from the work site. Consider the use of a ventilated helmet. At speeds in excess of 1 0 mph a full-face helmet can reduce the risk of head injury should a hazard be encountered. Therefore a full-face helmet should always be kept with the ATV. The full-face helmet should bear the American National Standards Institute (ANSI) Z90.1 label which signifies that it as meets national safety standards for design and manufacturing.

Face Shields and Goggles. For some work at slow speeds no head or face protection may be needed but eye protection is recommended. For other slow-speed operations, such as working in woodlands or ornamental nurseries, a full-face shield or goggles should be worn. One branch or thorn in the eye and your sight might be lost. At higher speeds, face or eye protection should always be worn as even an insect could cause a serious eye injury. The goggles or face shield should carry the ANSI Z87.1 label or equivalent (e.g. VESC 8 or V-8) on the bottom or side of the lens or shield. Grey- or green-tinted shields or goggles are best in bright sunlight, but after sundown only clear lens shields or goggles should be worn.

Boots or Shoes. Quality boots or over-the-ankle work shoes with good heels are a must. The soles and heels should be made of slip-resistant materials rather than leather or neoprene-type material. While motorcycle or ATV-type boots are best, a good quality pair of over-the-ankle, tightly-laced work shoes are adequate for most agricultural operations.

Gloves and Clothing. Gloves and clothing should be determined by the task. Long-sleeved shirts, full-length trousers, and well-padded gloves are normally needed. Avoid loose-fitting clothes which could easily catch on a branch or other obstacle.

Pesticide Applications. Pesticide applicators may have an increased exposure when using an ATV outfitted with a pesticide applicator because of the close proximity between applicator, spray nozzle and treated material. This makes following pesticide label personal protective equipment recommendations extremely important.

ATV use in Pennsylvania is governed by state law. The major parts of the law address registration and titling, operation of ATVs, accident reports, liability and law enforcement. The complete ATV law and a brochure summarizing important points can be viewed at The Pennsylvania Department of Conservation and Natural Resources website (www.dcnr.pa.us). Here are a few of the most pertinent points relative to agricultural uses.

Registration and Titling. All ATVs in Pennsylvania, except ATVs used solely for business or agricultural purposes, need to be registered and titled with DCNR. ATVs that are used for both work and recreation must be registered and titled. ATVs used exclusively for agricultural purposes are exempt from the sales tax, registration and title requirements of general use all-terrain vehicles.

Operation of ATVs and Public Roads. General use ATVs are authorized only to cross public roadways perpendicular to the roadway after coming to a complete stop and yielding the right-of-way to oncoming highway traffic. ATVs used exclusively for agricultural purposes are excluded from this regulation (See When ATVs are MAVs below). Children between 8 and 5 years old are authorized to cross highways with general purpose ATVs provided that they are under the direct supervision of an adult and have a valid safety certificate. These certificates are proof of training in an approved training program.

When ATVs are MAVs. ATVs which are used exclusively for agricultural purposes are classified in the Pennsylvania Vehicle Code as a Multipurpose Agricultural Vehicle (MAV) and are exempt from the Pennsylvania ATV law. A MAV is defined as “a vehicle which is 60 inches or less in width and 1200 pounds or less in dry weight and which is used exclusively for agricultural operations and only incidentally operated or moved upon the highways”.

ATVs which fit the definition of a MAV may be operated by the owner of the ATV on roads between parts of the farm and upon roads between farms not located more than two miles apart (Pennsylvania Vehicle Code, Chapter 3). An ATV that is used for dual purposes, that is, for both work and recreation, is not considered a MAV and thus would fall under the general ATV law at all times. If you are unsure about the MAV designation for your ATV check with the DCNR at -866-545-2476.