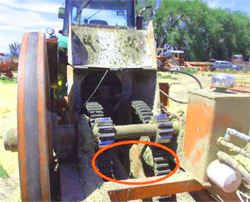 The laborer's legs were caught
in the baler's machinery when
the PTO was turned on while
he was lubricating the gears.
The bull gear/plunger shield
is shown in its raised position.
It was lowered during the
incident.

In June of 2016, a 29-year-old hay farm laborer’s legs were seriously injured when they were caught in a hay baler’s machinery.

This was the second season that the laborer had worked on his employer’s hay farm. His job duties included driving tractors with pull-type hay balers.

On the day of the incident, the laborer had finished baling hay for the day. He then went to do routine maintenance on the baler by greasing its bull gears. These two gears are driven by a flywheel which is powered by the PTO. The gears in turn power the plunger and the feed fork which together produce bales. The manufacturer’s specified method of spreading the grease on the gears was to put grease in the luber compartment while hand turning the flywheel and the lube pump crank.

The laborer could not get the hand crank on the bull gear luber to turn. His employer told him that if the crank would not turn to get up on the baler and grease the gears directly. The employer had made two holes on top of the shield surrounding the bull gear and plunger so that grease could be poured directly onto the gears. The employer’s practice was then to turn on the power through the PTO to the baler to activate the gears and distribute the grease. 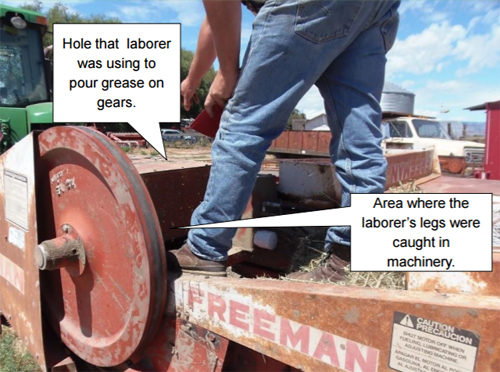 Reenactment of the incident scene on top of the baler showing
where the laborer was standing when the PTO was activated
by another laborer. 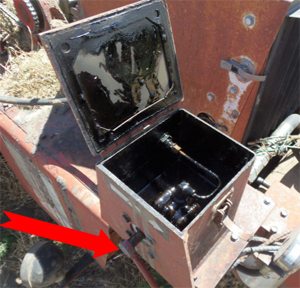 The bull gear luber which is the
manufacturer’s specified method of
lubricating the baler’s bull gears.
The hand crank (arrow) would not
turn, so the laborer did not use this
method.

Both the manufacturer’s operating manual and safety stickers on the baler stated that the tractor motor should be shut off when fueling, lubricating, or adjusting the machine. As the laborer was standing on top of the baler pouring grease through one of these holes, another worker thought he was signaling to turn on the PTO and did so. The laborer was standing on the plunger in a 4½-inch gap between a baler brace and the plunger when it started to move up and down. Both his legs were caught in the machinery. The operator realized what had happened and turned off the PTO.

First aid was given and emergency services personnel responded. He was taken to a hospital where he underwent surgery. His legs were broken in numerous places and he had other serious injuries to his legs. Four months later he was still unable to work. 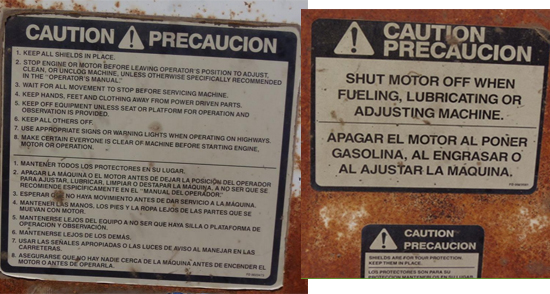 Stickers on baler with instructions for safe operation of baler.

This narrative was developed to alert employers and employees of a serious traumatic injury to a worker in Washington State and is based on preliminary data ONLY and does not represent final determinations regarding the nature of the incident or conclusions regarding the cause of the injury.