The goal of this document is provide insight into preventing grain entrap-ments and understanding how three types of entrapments occur. Severe injuries and deaths can be avoided with a constant commitment to basic safety measures and situational awareness. Every flowing grain entrapment is a preventable incident. 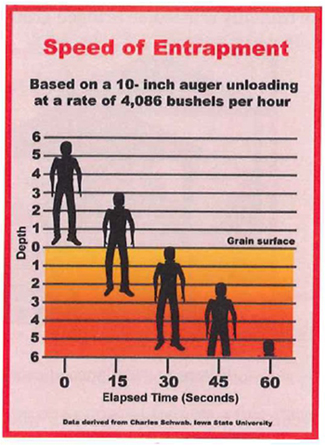 Forty-five percent of known grain entrapments involve corn. This is due to several factors including - increasing corn yields per acre, higher returns, and marketing strategies involving grain storage. Unfortunately, there isn’t a declining trend when it comes to flowing grain entrapments.

Never enter a bin of flowing grain. As the flow of grain exits the bin, a moving column of grain forms over the outlet. The grain mass flows at nearly the rate of the unloading auger. Individuals entering the bin while it is flowing get drawn into the flowing column and are pulled down through the grain mass.

The only safe way to avoid being drawn into a column of flowing grain is to NEVER ENTER a bin while it is unloading. 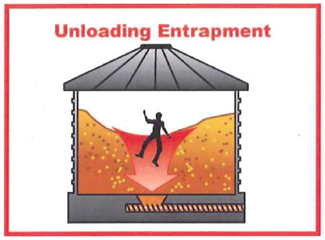 Once entrapped, it is impossible to escape flowing grain. A flowing column of grain can entrap someone to their knees and waist in 3-5 seconds. Depending on the size and speed of the unloading auger, a per-son can be completely engulfed in less than 30 seconds, leading to suffocation. The speed and force of the grain can entrap an unsuspecting person before they realize what is happening.

Besides suffocation, the victim is also at risk of continuing to sink to the floor or outlet and becoming entangled in the unloading auger. Survivors of entrapments and engulfments have often underestimated the tremendous force of the grain.

Most commonly, individuals enter grain bins when grain stops flowing from the exit. Often, out- of-condition grain forms a crust and the crust is drawn into the column of grain. The crusted grain forms a bridge over the grain inlet preventing grain flow. A common practice is to break up the crusted bridge with a rod so grain can start flow-ing again. Problems arise due to running the auger while using the rod to break up the crust. Once grain starts flowing, individuals get pulled into the column of flowing

Bridging is another type of grain entrapment. Out-of-condition grain can form a hard crust. When grain is pulled away it forms a cavity below the crust. The problem be-gins when an individual enters the bin to investigate. The crust appears solid and con-ceals the void beneath it. When the victim breaks through the crust, he is quickly cov-ered by the avalanche of grain collapsing into the cavity. If the unloading auger is running, the problem is compounded by the individual falling helplessly into the col-umn of grain and being pulled deeper into the grain mass. Entanglement into the unloading auger is another possibility. 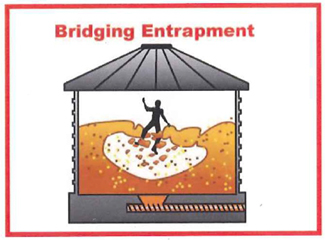 Avalanche entrapments are another form of entrapment. This is again caused by out-of-condition grain. Generally a crust forms and creates a freestanding vertical wall of corn. The problem begins when an individual enters the bin to knock down or chip away at the crusted mass. When grain is removed from the base of the mass, the po-tential for an avalanche and entrapment increases. The avalanche of grain can break lose and cover the victim or large chunks of heavy grain can break off and strike the victim, causing serious injury. Large chunks of grain can strike the victim with enough force to break bones. 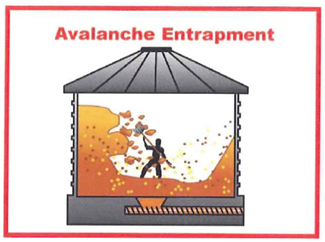 You can also check out the Growing Safely Grain Bin Safety video on the Monsanto Off-the-Job Safety YouTube Channel or watch the embedded video below.

The Growing Safely video series is sponsored by Monsanto Company. Monsanto is committed to the safety of its customers, employees, and those in the communities where we live and work.