On a clear fall Wednesday afternoon, at 3:45 p.m., a 69 year-old driver of a semi-trailer loaded with soybeans was killed when he turned off a two lane state highway and into a farm driveway, directly into the path of an oncoming freight train. The train and truck were both travelling west on parallel pathways; the truck driver was struck on the blind spot of his cab’s passenger side by the train. The truck driver was not wearing his seatbelt and was ejected from the cab. The train finally came to a stop at the next intersection, approximately a half a mile down the tracks.

To prevent future occurrences of similar incidents, the following recommendations have been made:

The 60 year-old semi-truck driver had been a Teamster for 27 years, with a perfect driving record during his career. He had retired and had taken on seasonal employment with a farm during their harvest, hauling grain. He had been employed with the farm for 6 years and was a valued asset to their business.

On the day of the fatal incident, the temperature ranged from 60-75 degrees Fahrenheit with mostly cloudy skies. 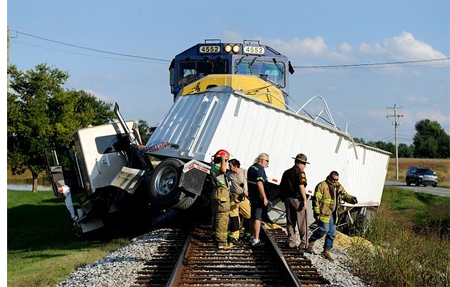 The Kentucky Fatality Assessment and Control Evaluation Program was notified of an occupational fatality involving a semi-truck and a train by the Kentucky Labor Cabinet.

On a clear fall Wednesday afternoon, at 3:45 p.m., a 69 year-old driver of a semi-trailer loaded with soybeans was killed when he turned right off a two-lane state highway and onto the entry driveway of a farm, directly in the path of an oncoming freight train. The train and truck were both travelling west on parallel pathways and the unknowing truck driver was struck on the blind spot of his cab’s passenger side by the train. The truck driver was not wearing his seatbelt and was ejected from the cab through the windshield. The train finally came to a stop at the next intersection, approximately a half mile down the tracks. Four eye witnesses stated they did not recall hearing the horn sound on the train, but the police report stated the conductor sounded the horn several times to alert the driver. One of the witnesses was the son of the farm owner. He stated that he was waiting for the driver at the barn, witnessed him being struck by the train and ran and called for help.

One witness stated she and her daughter were traveling east coming back from a shopping trip and saw the truck turn onto the driveway. The witness said she asked her daughter if she thought he was going to stop, and then he was hit by the train. She stated they pulled over and placed a call for help.

The farmer’s son was questioned about whether the driver had worn hearing aids; he stated that he did not. When the farmer’s son was asked if there was something bothering the driver, the son said it was just another ordinary day, that he had a conversation with the driver and he was in a joyful mood. The son did say the reason the driver was not wearing his seat belt was because the distance he was traveling was about a quarter mile. He thought if the driver had the seat belt on, he could have possibly survived the crash since the train hit the passenger side of the trailer.

The crossing had warning lights but not guard arms. It’s not known if the warning lights were working, but the truck driver did not seem to see the lights or hear the sound of the blowing horn.

The cause of death was blunt force injuries from collision with a train.

Recommendation No.1: When approaching train tracks, truck drivers and farmers should obey all traffic guidelines and regulations pertaining to railroad track crossings.

Approximately every 3 hours somewhere in the United States, a person or vehicle is hit by a train. A freight train moving at 55 miles per hour can take a mile or more to stop – that's the equivalent of nearly 18 football fields. With 5.3 million new drivers every year in railroad service territory, highway-rail grade crossing safety awareness is important for everyone. It’s imperative to always be aware and stop, look and listen before crossing any railroad tracks.

Recommendation No. 2: Drivers should always wear seat belts while operating any vehicle.

A 2010 study on CMV (Commercial Motor Vehicle) driver safety belt usage showed 78% CMV drivers were using their safety belts. Section 392.16 of the Federal Motor Carrier Safety Regulations states a CMV that has seat belt assembly installed at the driver’s side must be used before operating the CMV.

September 2012, Wayne State University in Detroit Michigan did a study for the Michigan Office of Highway Safety Planning on Commercial Motor Vehicle direct use and observation of safety belt usage. Their final report showed through their observation 84.8% of commercial motor vehicles used their seatbelts.

National Highway Traffic Safety Administration estimates 147,000 lives have been saved by using the safety belts in a study done between 1975 and 2001.

Recommendation No. 3: Crossings should be marked and guard arms installed at all crossings.

Recommendation No. 4: Truck drivers and farmers should consider attending an “Operation Lifesaver” education program in communities where railroad traffic is present.

Operation Lifesaver is a nonprofit, nationwide public education program designed to eliminate collisions, deaths, and injuries at highway-rail intersections and on railroad rights-of-way. It is sponsored cooperatively by a wide variety of partners, including federal, state, and local government agencies, highway safety and transportation organizations, and the nation’s railroads. Highway-rail grade crossings present a unique traffic environment for motorists. According to the Operation Lifesaver Program, driver inattention and impatience are the most common factors contributing to collisions between motor vehicles and trains. Operation Lifesaver strives to increase public awareness about the danger at places where roadways cross train tracks and on railway rights-of-way. The 27-year-old program is having an impact on drivers. Since the program began in 1972, the Federal Highway Administration has credited Operation Lifesaver and its safety partners with saving 10, 000 lives and preventing 40,000 injuries. Information can be obtained about Operation Lifesaver by calling 1-800-537-6224 or by visiting their website at http://www.oli.org.

The Kentucky FACE program would like to thank the witnesses and the farm owner for their assistance with this report.

The Kentucky Fatality Assessment & Control Evaluation Program (FACE) is funded by grant 2U60OH008483-09 from the Centers for Disease Control and Prevention and the National Institute for Occupational Safety and Health. The purpose of FACE is to aid in the research and prevention of occupational fatalities by evaluating events leading to, during, and after a work related fatality. Recommendations are made to help employers and employees have a safer work environment. For more information about FACE and KIPRC, please visit our website: www.kiprc.uky.edu. 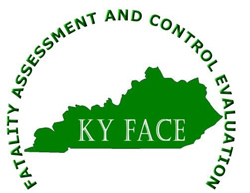