During March 2009, a 70-year-old farmer died in a grain bin on his 600 acre (242 hectare) farm in southeast Iowa. The victim and two other men began unloading shelled corn through the side door of a corrugated steel bin. They used a grain vacuum to pneumatically convey the corn from the bin into a waiting semi-truck trailer. The victim entered the bin, something the lifelong farmer had done many times, to hold back and meter spoiled corn as it mixed with other corn flowing toward the grain vacuum at the side door below. He became entrapped and then engulfed in the flowing grain. The victim in this event, which was not witnessed, was recovered by emergency medical services (EMS) personnel and transported to a local hospital where death was pronounced. The cause of death was determined to be asphyxiation due to submersion in grain within a bin.

A 70-year-old farmer was engulfed and suffocated while he and two co-workers were unloading corn from a grain bin on his farm in southeast Iowa during the spring of 2009. He entered the bin to hold back spoiled corn (corn that had gone out of condition), metering and mixing it with the corn that flowed toward the grain vacuum at the side door below. When co-workers spotted his foot at the side door they called for help. EMS personnel responded to the call and removed the victim from the bin in about an hour. The victim was pronounced dead at the local hospital.

Iowa FACE investigators were alerted to this incident by newspaper clippings and immediately initiated preliminary investigations. An on-site interview was conducted 10 days after the incident. Additional information was obtained in telephone interviews with responding and investigating authorities and from review of their reports. 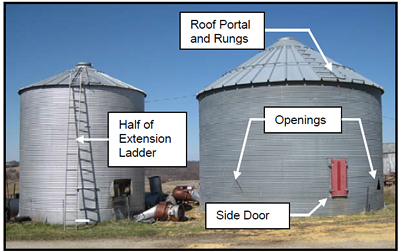 Photo 1 – Half the extension ladder leans on the
adjacent bin. Also shown are the side door where
grain was vacuumed out and openings cut by rescue
workers, which are recommended to be cut so the
flap of material is bent up (hinged at top) for use as
a valve.

The victim and his wife had lived on the farm for 38 years. His father had farmed the same land for 50 years before him. The victim, like his father, had accumulated 50 years of experience farming. In their nearly four decades on their farm, the victim and his wife raised a family, added two adjacent parcels of land, and raised a variety of crops, including soybeans, corn, oats, and grass seed on 600 acres (242 hectares). The farmer was also a seed dealer on a small scale.

A 24-ft (7.3 m) extension ladder had been separated into its two halves. One half propped against the outside of the bin provided access to the roof hatch. The other half was inside the grain bin with one of its ends attached by wires to rungs on the roof near the access hatch (Photo 2).

Shortly after 7 a.m., the victim met the semi-truck driver and a local farmer at the bin site to begin transferring corn from the bin to the truck’s trailer. At about 8:30 a.m., the victim carried a grain shovel up the ladder leaned against the outside of the bin. He entered the bin through the roof access hatch to check the surface of the grain for out-of-condition corn or clods that could cause the corn to stop flowing, plug the conveyor, or detrimentally affect the value of corn in the truck. An estimated 475 bushels (17 cu m) had been transferred from the bin’s side door, enough to fill the first hopper of the semi-truck trailer. The victim had not been seen in 20-30 minutes when the two men who were operating the grain vacuum at the side door of the bin spotted the victim’s foot emerging in the grain. EMS was called at 8:59 a.m. 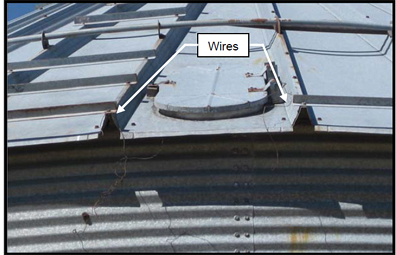 The victim could not be seen from the access hatch in the top of the bin by the arriving EMS personnel. Six openings were cut around the periphery of the grain bin. They were placed and spaced in the second ring above the ground to reduce pressure on the victim and remove corn to aid in the rescue. It took approximately one hour to recover the victim from within the bin.

He was found submerged in an upright, standing position 8-10 ft (2.4 – 3.0 m) below the surface of the corn at the apex of the inverted cone-shaped cavity above where the corn was being drawn from the side door. The base of the cone at the surface of corn was about 15 ft (4.6 m) above the side door opening and was described as elliptical or eye-shaped around an 8 ft (2.4 m) diameter circle. The volume of such a cavity is approximately 250 bu (8.8 cu m). Given the difference between this volume and the larger volume of corn in the truck, plus the fact that EMS personnel reported no smell or visible out-of-condition corn in the bin, the victim likely used the shovel to skim spoiled corn from the top surface of corn in the bin and move it to the area where corn was flowing from the bin.

The exact location and orientation of the ladder inside the bin before rescue efforts commenced was not recorded. With its length equal to the diameter of the bin, it likely spanned from the access hatch across the center of the bin to the opposite side at a downward angle to the surface of the corn.

Portable grain vacuums can easily convey corn at 4-5000 bu/hr (140-175 cu m/hr), depending on their speed of operation, the length of piping, other restrictions, and elevation changes. That is about three times higher than a rate based on the reported 475 bu (17 cu m) in 20-30 minutes. At high flow rates a victim can be thigh-deep in 5 seconds or less: proportionately more time would theoretically be required at the flow rate calculated from data reported in this incident. Nonetheless, a person working on top of flowing grain can be entrapped surprisingly quickly.

The cause of death was determined to be asphyxiation due to submersion in grain within a bin.

Recommendation 1: Place signs warning about the hazards of confined spaces at all entrances to bins.

Large bins of stored grain present the potential for engulfment. Confined space warning signs can serve as an important reminder of the hazards and the safe operating practices to be followed. These signs should include safe operating practices, such as working in teams, ventilating the space prior to and during entry, and locking out equipment before entry as well as what to do and not do in an emergency.

Recommendation 2: Allow no one to enter or be inside a bin during loading or unloading.

Crusted and flowing grain can lead to sudden entrapment and engulfment of anyone inside a grain bin. Grain thigh-deep can entrap a person, and flowing grain can pull a person under in 10 to 15 seconds. As the depth of flowing grain reaches thigh-deep, a person with typical strength can no longer hold on to something or pull themselves out. Prior to entry into a grain bin, all equipment that poses a risk to someone entering should be stopped, turned off, and locked out, including electric circuits, tractors driving power take-off shafts, and stationary engines that power auger or vacuum unloading equipment.

Recommendation 3: If a grain bin must be entered, use a safety harness and three-person team for the entry.

Even when grain transfer is not underway, an engulfment hazard can still exist within a full or partially full grain bin. If a grain bin must be entered, a safety harness with secured safety line attached should be worn by the person entering the bin. The safety line helps keep the person wearing the safety harness from sinking too far into the grain or aids in pulling them from the bin if necessary. A suitable anchor is needed for the safety line and the structure of the bin must be capable of supporting the loads. Three people should be used for entry. A second person should stay at the bin entrance maintaining visual contact with the person inside the bin and a taut safety line. The third person should stay on the ground to go for help or assist in freeing the person in the bin, if necessary. The storage of grain within a bin can cause the generation and build up of toxic gases such as carbon dioxide and nitrogen oxides. These gases are all heavier than air and will displace oxygen in lower areas. Carbon dioxide can decrease oxygen concentration enough to cause unclear thinking, drowsiness and ultimately loss of consciousness. Nitrogen oxides are respiratory irritants which can cause coughing, difficulty breathing, and nausea. At higher concentrations, nitrogen oxide can lead to fluid in the lungs. Extra caution should be used in the lower sections of the bin. This hazard can be controlled through the use of ventilation fans. All ventilation fans should be operating before and during the time someone is inside a bin as well as in the emergency situation when someone is entrapped or engulfed. Ventilation fans should be operated for a minimum of 30 minutes prior to entering a grain bin. Longer ventilation times are needed for bins larger than 24 feet in diameter or when silage surface is more than 15 feet from the top of the bin. Fans should also be kept running for as long as a worker is inside the bin.

Recommendation 4: Break up surface crusts or clumps from outside the bin.

Storing and maintaining grain in proper condition is critical. Grain that has gone out of condition can clump, harden as a surface crust, or stick to the sidewall of a bin. This material can create an engulfment hazard for persons who enter the bin to break up crusts or clumps. Moving onto a surface crust with a cavity underneath, such as from unloading grain, can cause the crust to break and immediately engulf a person. Procedures to break up crusts and clumps from outside the bin by using a pole or weighted line should be used. Such procedures for a given bin should also address the risk of contacting overhead electric lines.

Acknowledgment: We would like to thank Jacob Krzystowczyk, MS (Graduate Research Assistant) for his assistance in finalizing this investigative report.

Fatality Assessment and Control Evaluation (FACE) is a program of the National Institute for Occupational Safety and Health (NIOSH), which is part of the Centers for Disease Control and Prevention of the US Department of Health and Human Services. Nationally, the FACE program identifies traumatic work-related deaths, conducts in-depth studies of select cases, makes recommendations for prevention, and publishes reports and alerts. The goal is to prevent occupational fatalities across the nation.

The NIOSH head office in Morgantown, West Virginia, carries out an intramural FACE case surveillance and evaluation program and also funds state-based programs in several cooperating states. The Iowa FACE program is conducted by the Injury Prevention Research Center at the University of Iowa working in conjunction with the Iowa Department of Public Health and its Office of the State Medical Examiner.

Nationally, NIOSH combines its internal information with that from cooperating states to provide information in a variety of forms which is disseminated widely among the industries involved. NIOSH publications are available on the web at http://www.cdc.gov/NIOSH/FACE/ and from the NIOSH (1-800-CDC-INFO (1-800-232-4636), TTY: 1-888-232-6348, email cdcinfo@cdc.gov).

Iowa FACE also publishes its case studies, issues precautionary messages, and prepares articles for trade and professional publications. In addition to postings on the national NIOSH website, this information is often posted on the Iowa FACE website at http://www.publichealth.uiowa.edu/FACE/. Copies of FACE case studies and other publications are also available by contacting Iowa FACE directly.

For additional information regarding this report or the Iowa FACE Program contact: