In the late winter of 2005, an 84-year-old male farmer died when his tractor overturned. The victim was driving his tractor for cattle feeding during the early evening hours. When he had not returned within four hours, the family searched and found him 30 minutes later. The victim was pinned underneath his overturned tractor that had come to rest wheels-up. Examination of tire tracks at the scene suggested that the tractor was travelling at a fairly moderate speed down slope when it overturned after either striking a hay bale or making a hard left turn. Emergency responders made no attempt at rapid extrication, and no resuscitation effort was performed. Traumatic asphyxia accompanied by blunt force trauma was listed as the cause of death.

This incident occurred in March of 2005 to an 84-year-old male farmer who was tending his cattle on his own farm. Other family members did reside on the farm with the victim. It is unknown if the victim worked off the farm in addition to his farming duties.

The Iowa FACE Program became aware of this incident through articles posted in local print media. Information was gathered through those articles; official reports from the local county medical examiner, the state medical examiner, and local sheriff’s office; and an interview with the family of the victim.

The victim owned a 900-acre farm operation composed of tree pasture with no row crops. He had grown up on this farm, married young, and raised his family there. However, the victim’s level of training or certification in safe farm equipment operation is unknown. The safety record of the farm as a whole is also unknown. 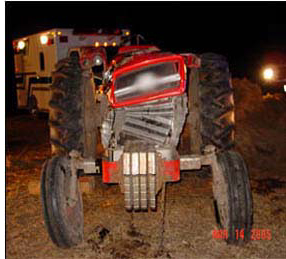 The victim typically fed his cattle during the early evening hours while operating his tractor. He preferred working on his farm during the evening hours, according to those who knew him and stated that working at night never bothered him and that he almost preferred night work. The topography of the land was hilly. There was no artificial lighting.

On a cold, rainy evening, the victim left his home around 6:00 p.m. to feed his cattle. Bales of hay had been placed on the same hillside where the cattle were located. Sunset occurred at 6:11 p.m. and civil twilight ended at 6:39 p.m., so lack of artificial lighting may have contributed to the incident.

The victim owned and operated a 1966 tractor, which was never fitted with a rollover protective structure (ROPS). The tractor appeared to have three forward facing and one rear facing lights based on the sheriff photographs, but their operability and illumination capability were indeterminable following the incident. The tractor also had a tire that needed to be pumped up each day and a damaged right front wheel bearing.

When the victim had not returned to the family home four hours after he was last seen, family members initiated a search. He was found by a family member at approximately 10:00 p.m. Emergency services were contacted, including the local sheriff’s office, fire and rescue services, and ambulance. Emergency responders determined that the victim was already dead, and no attempts at rapid extrication or resuscitation were conducted.

Tire track measurements suggest that the tractor was travelling down the hill at a fairly moderate speed in the wet terrain. Based on medical examiner investigations and an interview with family, two probable scenarios were offered to describe the incident. In one, the tractor appeared to have run over a large hay bale and overturned while traveling downhill. The tractor likely completed 1.5 full revolutions and stopped upside down, pinning the victim. Another scenario was that the victim had attempted a left turn to avoid the fence and ditch at the edge of the hillside, and that the sharp left turn along with the damaged right front wheel bearing and tire led to its instability. The tractor overturned on its right side and trapped the victim. Lack of artificial light and the speed of the tractor may also have been contributing factors. 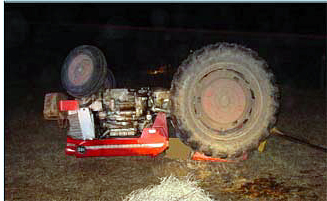 Photo 2 – The final, inverted position of
the tractor with pinned victim.

The tractor reportedly passed through brush in a “reckless manner” prior to the overturn and may not have been under control of the operator. Toxicology reports conducted as a part of the autopsy noted the presence of both propoxyphene and norpropoxyphene in the victim’s blood. Propoxyphene is better known as the pain killer Darvon®. Norpropoxyphene is a metabolite of Darvon® found in users of that pain killer. Blood concentrations of these Photo 2 -The final, inverted position of the tractor with pinned victim. chemicals were 320 ng/ml and 1320 ng/ml respectively, which are in the therapeutic range. Propoxyphene is known to have mild analgesic effects and high respiratory depression effects, especially when taken in large quantities. Medical opinion supports that the drug may have possibly impacted cognition. Metabolism of drugs is usually slower for older persons, and how effectively the drug is eliminated from the system depends on liver and/or kidney function. However, the victim’s detailed medical history relevant to the drug’s metabolism is unknown. For example, it is not known if the decedent was prescribed this medication, and for how long the drug had been taken. Without this history, the precise role of medication in this incident is not fully known.

The autopsy report lists asphyxia with blunt force trauma as the cause of death.

ROPS with seat belts are the most effective prevention strategy to reduce traumatic injury from overturns. ROPS are open heavy metal frames or frames within cabs that enclose tractor operators. They do not prevent tractor overturns but rather create a survivable environment around the operator. ROPS are available on newer tractors, but the decedent was driving an older one without a ROPS. Tractors can be retrofitted with ROPS and a seat belt at a reasonable cost, and programs that provide incentives to install and retrofit ROPS may be beneficial.

Recommendation 2: Farmers should consider equipping tractors and other farm machinery used for operations between sunset and sunrise with additional lighting to improve the operator’s ability to identify hazards in low-light conditions.

Operation of farm equipment between sunset and sunrise increases the risk of collisions with unseen obstacles or accidents related to uneven surfaces, particularly if the speed of the tractor exceeds the illumination capability of the headlights. Depending upon how the headlights are aimed, their light pattern may not provide sufficient illumination to the side and immediately in front of the tractor to enable the operator to identify hazards such as holes, hay bales, or stones which pose the potential to cause overturn or operator ejection if the tractor runs over them. Hilly terrain may negatively affect the illumination distance as the headlight beams rise and fall as the tractor traverses undulating ground. This situation could have contributed to the victim hitting the bale of hay on the field. When conducting night operations, mounting lights aimed toward the side of the tractor and toward the ground near the front of the tractor, in addition to the headlights aimed a farther distance to the front, could increase the operator’s ability to see and avoid hazardous obstacles.

Recommendation 3: Tractor operators should be educated to recognize and assess risk of an overturn and factors that contribute to an overturn. In particular, contributors to this incident were speed, tractor configuration, uneven surfaces, and wet conditions.

Tractors have relatively high centers of gravity compared to other vehicles, partially compensated for with longer and wider wheelbases. Steep, uneven surfaces can tip a tractor to the point where the center of gravity is no longer over the footprint provided by the wheels. Speeds should be reduced to accommodate wet conditions, which create less traction and longer braking conditions.

Recommendation 4: Equipment operators should be aware of the limitations that some medications may impose on safe equipment operations.

Darvon® is an opioid-like pain reliever, seldom prescribed today. Although the incidence of side effects is low, Darvon®, a CNS depressant, is known to have mild analgesic effects and high respiratory depression effects, especially when taken in large amounts. Opiates usually have warning labels on bottles indicating potential drowsiness and advising against operation of machinery. It is not known if the victim was a longtime user of the medication or aware of potential side effects, and there is no conclusive evidence of the drug’s contribution to this incident. Nonetheless, no farm equipment should ever be operated while the operator is under the influence of any drug that may impair cognition.

Use tractors with ROPS to save lives. Cooperative Extension Service, Iowa State University of Science and Technology, Ames. Iowa, July 1996 as viewed at www.extension.iastate.edu/Publications/PM1265D.pdf on 6/2010.

Acknowledgment: We would like to thank Jacob Krzystowczyk, MS (Graduate Research Assistant), for his assistance in finalizing this investigative report.

Fatality Assessment and Control Evaluation (FACE) is a program of the National Institute for Occupational Safety and Health (NIOSH), which is part of the Centers for Disease Control and Prevention of the US Department of Health and Human Services. Nationally, the FACE program identifies traumatic work-related deaths, conducts in-depth studies of select cases, makes recommendations for prevention, and publishes reports and alerts. The goal is to prevent occupational fatalities across the nation.

The NIOSH head office in Morgantown, West Virginia, carries out an intramural FACE case surveillance and evaluation program and also funds state-based programs in several cooperating states. The Iowa FACE program is conducted by the Injury Prevention Research Center at the University of Iowa working in conjunction with the Iowa Department of Public Health and its Office of the State Medical Examiner.

Nationally, NIOSH combines its internal information with that from cooperating states to provide information in a variety of forms which is disseminated widely among the industries involved. NIOSH publications are available on the web at http://www.cdc.gov/NIOSH/FACE/ and from the NIOSH (1-800-CDC-INFO (1-800-232-4636), TTY: 1-888-232-6348, email cdcinfo@cdc.gov).

Iowa FACE also publishes its case studies, issues precautionary messages, and prepares articles for trade and professional publications. In addition to postings on the national NIOSH website, this information is often posted on the Iowa FACE website at http://www.publichealth.uiowa.edu/FACE/. Copies of FACE case studies and other publications are also available by contacting Iowa FACE directly.

For additional information regarding this report or the Iowa FACE Program contact: