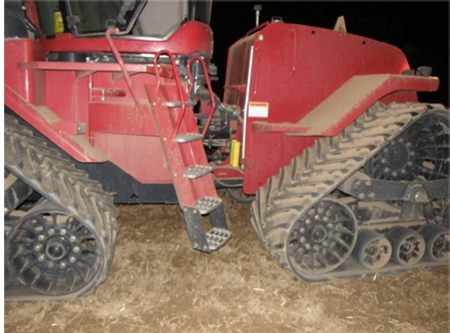 The victim was attempting to climb the tractor cab access ladder
when he was run over by the moving left rear track. 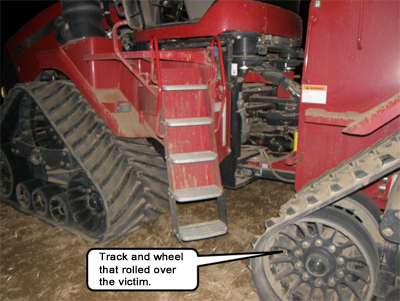 Scene of the incident where the victim tried to climb the
ladder of access to the cab of the tractor and was hit by
the rear left track while moving.

On October 15, 2013, a 34-year-old agricultural pesticide handler died when he was run over by a tractor. On the day of the incident, there were two workers employed by different employers who were working to apply a soil fumigant pesticide to a field. One worker was a certified pesticide handler (victim) whose task was to load the fumigant from stationary field tanks into trailer-mounted tanks being pulled by tractors. He had been at this site for about a week. The other worker was a tractor operator/pesticide applicator who was operating a tracked tractor pulling a 1,600-gallon trailer-mounted pesticide tank to fumigate his employer’s fields. The two workers started work at 1:30 p.m. and were scheduled to work to 11:30 that evening. At about 7:20, the victim exited his parked pickup truck on the edge of a field and walked toward the tractor, which was actively applying fumigant. He did not communicate with the operator. As it was dark and the victim was not wearing a high visibility vest, the tractor operator did not see the victim approaching the moving tractor until he was a short distance away. He began to slow the tractor from about 5.5 mph to 5 mph. The victim approached the tractor’s left side and reached for the cab access ladder handrail and attempted to place his left foot on the ladder’s bottom step. As he was attempting to mount the ladder of the moving tractor, his right leg was caught by the left rear track and he was pulled under and run over by the track. Investigators determined that the victim had previously ridden along with the operator, but he had entered the operator’s cab only when the tractor was stationary after the victim had refilled the tractor’s pesticide tank. The tractor operator’s manual stated that the extra seat in the cab is to be used only for instructional and service diagnosing purposes. 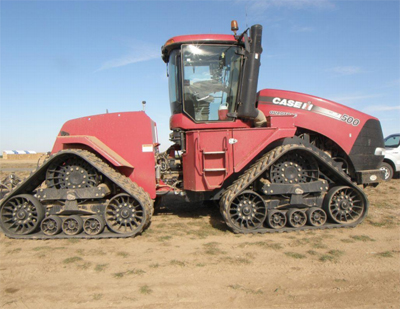 Scene of the incident showing the tank of pesticide
towed the trailer and other accessories. 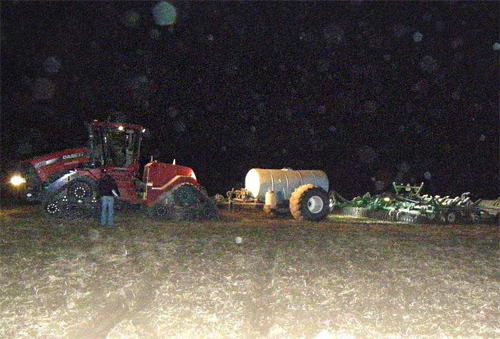 Tractor involved in the incident. It did not have a
rollover protective structure (ROPS) or a seatbelt.

This narrative was developed to alert employers and employees of a tragic loss of life of a worker in Washington State and is based on preliminary data ONLY and does not represent final determinations regarding the nature of the incident or conclusions regarding the cause of the fatality.